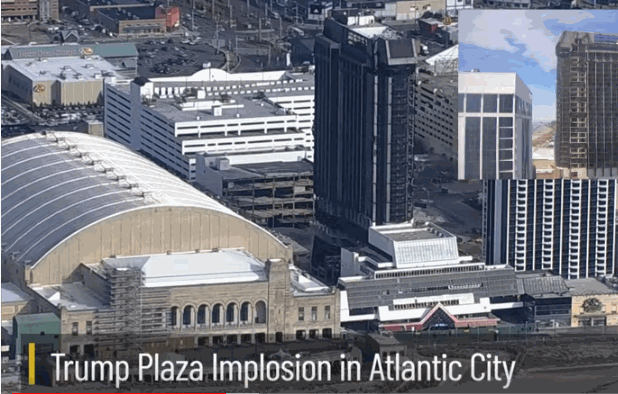 Donald Trump’s once-majestic Atlantic City casino, later bankrupt and crumbling from disrepair, was imploded this morning about 90 minutes ago. NBC New York covered the event with the help of helicopter photography. It took 3,000 sticks of dynamite to bring it to the ground.

The Trump Plaza was built by Donald Trump and opened up in May of 1984 and operated until 2014. Trump also built the Trump Marina casino and Trump Taj Mahal. All three of them failed as business ventures and went under, because of an overbuilding of casinos in Atlantic City. By building three big casinos he actually competed against himself and was forced to sell them off one by one. Carl Ichan bought the Trump Plaza from him a few years ago for future development.

Now people in Atlantic City are hoping that something new will finally come after the removal of this deteriorating hulk on the Board Walk. Its closure in 2014 put 1,300 people out of work. Those that point at this as a failure for Trump do not realize that the Trump Plaza was one of his first steps into becoming a mega celebrity through the usage of casinos and gambling operations. That image helped him to raise money for other projects and eventually become President of the United States with millions of people looking up to him as their leader.